Learning From Our Griswold Christmas 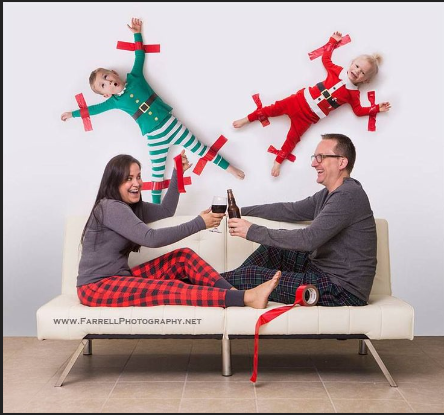 To be honest, I am one of those who believe old dogs can’t learn new tricks, but through the hustle and bustle of this holiday season I believe there were several lessons Santa kept hidden in his sack for me. The first lesson started on Saturday, December 23rd. As my body was groggily waking up and I was saying good morning to my 7 yr. old daughter, what to my wandering eyes did appear but wrapping paper stuffed in a corner, a hatched Hatchimal, an LOL glitter doll half opened, and a tree half bare. If you’re like me, the names of these toys allude you, but these are the girly, toys of the year my daughter had dreamed about for the entire month of December. As the day moved on, we continued to find more gift nightmare surprises throughout our house – bows tossed, boxes open, and gifts splayed out on the floor. Admittedly, I had a reaction I was not proud of neither was I expecting. My eyes began to fill with tears and I yelled for my daughter to go to her room. My heart was broken as I thought of the wrapping sessions that went to 1 am on some nights. I thought of the late online buying sprees. I thought of how Ryley had already opened the gifts she wanted most and had written about in her Santa letter. In my painful state, I thought Christmas had been ruined. At the time, I thought why had my daughter not thought of us? Where had I gone wrong? Even after Ryley had tried to play the guessing game days beforehand, she had made the biggest Christmas felony mistake known to man which was to open a majority of her gifts before the holiday.

Well, for many of you who are imagining this event like the Griswold Christmas the story could have ended here, but like every Hallmark or Norman Rockwell Christmas story there always needs to be a red bow at the end. As the story was unfolding, I happened to look at a Facebook feed my brother started regarding the holidays. There was story after story of memories – memories of food, memories of events, memories of conversations, memories of traditions, and memories of days gone by. What my Dad mentioned in his letter was there was no memories of gifts. No one had talked about their Hatchimal, LOL, LPS, Cabbage Patch doll, Slime, Teddy Ruxpin, or Fingerling. Later that day, my Mom said to me, “You’ll laugh about this story someday. My husband said, “Let’s not ruin the holiday – let’s pick up our boot straps and move on.” Phil was right in saying it was curiosity and excitement that led my daughter down this path – it was not malicious intent. Sure, Ryley knew we were still sleeping when her little hands went to work, but truly believe she was thinking how much she wanted to open her gifts not the tears this event would trigger. Don’t worry for all of my parent readers, this is not to say there were no consequences. Lucy, the elf, left a day early and Ryley has to earn back the gifts she opened. There was also no laughs on the 23rd, however, when I again reached a sane state of mind – I believe like everything else that’s happened in my life there is a reason. For me, Ryley had to open her gifts for me to not take myself so seriously and to realize the holidays really aren’t about the gifts. If you think about the Christmas story, Jesus was born in a manger. His parents were poor and there were no gifts until the Magi’s came to visit Jesus and these gifts helped Jesus and his parents survive in Bethlehem until they could safely return home. The gifts were not gifts of want, but more gifts of need. Like many of you, we try as parents to be the perfect parents; which in shorthand means jam a lot of holiday events into a couple of weekends and spend a lot of money on food and presents. We get exhausted preparing for the holiday and what we find out is this is not what really matters at the end of the day. What matters most is what we’ll discuss in my next lesson learned.

The next lesson learned happened on Christmas Day. Early in the morning, we got a call from one of Ryley’s sister’s adopted mothers. Originally Jaida and her Moms had not planned to come to our house for the holiday, but when they woke up they decided the holidays wouldn’t be the same without family, so, they called us and asked us if they could still come. Honestly (and this is the truth) I was thrilled! Thrilled my daughter would have someone to play with, thrilled to introduce Cheryl, Jaida, and Roxie to our extended family, and thrilled our family would be complete for the day. Being thrilled is where this story should end. However, if I said my only emotion was that I was thrilled, this would be a lie. Of course, our doors are always open for Jaida and her Moms, but let me preface this story and say I am a Miguelucci by birth with an Italian background. Those who are Italian or know an Italian family will understand my next statement – I was worried (actually more than worried) there would be enough food. None of the grocery stores would be open and we were having an upscale dinner of crab legs, prime rib, and other side dishes; which we had diligently planned and shopped for during the week. We had also not done a good job with planning our desserts or stocking our bar. Phil’s parents had said they would bring one pie and I had asked but wasn’t sure if my niece was bringing the family’s favorite Cherry Crunch. I was scared we would end up with one pie, candy from my stocking, and a few decorated sugar cookies for 12 people. My husband’s sister had said she would bring wine and Ginger Beer for Moscow Mules, but wasn’t sure we would have anything else to drink but the white wine and the Moscow Mules. Well, like the story of the fish and the bread in the Bible and turning water into wine, we had more than enough food left over (probably the 7 baskets of food which were left over after Jesus fed the crowd). We also had plenty of desserts since Phil’s sister came to the rescue. She had baked two additional pies for the night before that had not been touched. As for the bar, Jaida’s moms brought their own wine and Moscow Mules were perfect for the rest of us. In all of my stress, I had forgotten what truly mattered. What truly mattered is we had a houseful of cheer. Like always, God had supplied more than we needed. On this snowy, white Christmas I was reminded of our Savior’s birth and God was more than present.

In conclusion, I hope you will learn from my lessons and you don’t need Santa to hit you over the head with his sack like I needed this holiday season. So what were the big lessons? I learned holidays are really not about the physical gifts, but the gifts of family and the gifts of grace. This sounds simple, but I believe many of us take our families and grace for granted. So if I were going to give you a gift this season it would be to realize your blessings, take a breath, find the true reason for this season, learn from your lessons, and know that God is more than present in your life.