The Bug Who Thought He Lost His Buzz

What Happens When the Big Bad Beast Stings

Bugsy, the bee, no longer feels his buzz, so, he goes to the hospital to see what is the matter. When he gets examined by Doc Fuzz, he soon learns he has the Big Bad Beast. Like many bees, he begins asking God the tough questions such as why. Luckily God is by his side to support Bugsy through the journey.

Read the “Bug Who Thought He Lost His Buzz” to talk to your own little bee about being diagnosed with a terminal illness (ex. Cancer) and then follow the activities recommended in the front of the book and on the web site (www.wattsbuggingyou.com) to continue talking to God what it means for your family.

Excerpt from the Book:

Bugsy woke up and wanted to buzz, buzz, buzz
But his stomach hurt and his wing had an ouchy…
He was rather growly, grumpy, and grouchy.

What happened, Doc, I am not myself today
Can you please explain why my buzz has gone away

Doc Fuzz examined Bugsy from antennae to wing,
And said the Big, Bad Beast had stung his terrible sting.

No, God this cannot be…the Big, Bad Beast could not have stung me!
No, God why, why, why – Bugsy said with a snort and a sigh!

Why can’t this beast pick on someone his own size…
Why does he pick on us bumblebees, ladybugs, and flies?

Who is this beast who has shown his terrible claws?
Doesn’t he know bugs hate the boos, blues, and blahs?

God huffed and he puffed and he said my son –
Don’t give up when there is still a battle to be won.

But God I have a limp in my step…
I have a bruise on my wing…
How can I possibly fight this thing?

The link to additional support materials and conversation starters: ““The Bug Who Thought He Lost His Buzz – What Happens When the Big, Bad Beast Stings” Reference Materials 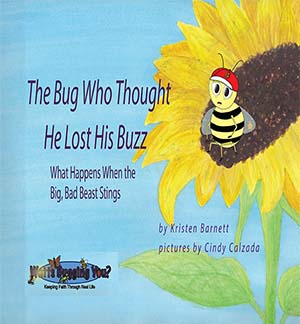 Learn How you can DONATE A BOOK