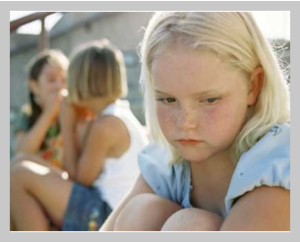 My brother and I both have four year olds; which led us to a discussion around childhood bullying. His pediatrician told him four years old is when children start bullying each other. The next day David took his 4 year old daughter to school and one of her friends didn’t want to play. Luckily, Bella was confident enough to shrug it off and go play with other friends. Surprised but not surprised by the conversation with David, I can remember my sister’s daughter at the age of four having her hand forced into the hermit crab’s cage because the other girl said Katie was prettier and had more friends than she did. Then there is my daughter Ryley who tells me who are her friends and who are not. Of course, my response is we need to be friends with everyone, but why does this all happen and what should we do as parents to stop the bullying epidemic? In my opinion, bullying starts young because children are starting to put two and two together when it comes to relationships.

As for the topic of bullying, there are tons of articles explaining the effects, what to do, etc. A recent article by Scholastic tells parents to provide an environment for open communication, problem solving, and collaboration with the school and parents of the bully. I agree with many of these tactics, but also think it is about finding out the core problem before you just try to solve it. Let me preface my response by saying, there is no blame to be put on the victim, however, we must be honest with why bullying occurs. The perpetrator is either jealous of the victim or just like the runt of a wolf pack the victim is an easy target – shy, small in stature, scared to stand up for themselves, may not have many friends, may be described as awkward, and can have issues with self-confidence. The bully, on the other hand, may also have confidence concerns because they are led by the need to be popular or the need to be in control.

My advice when talking to young children about bullying is to discuss it in terms such as how can we be nice vs. how we can be bad or mean. I would also attempt the following teaching moments before they are even aware of what bullying is:

Assertiveness, but Not Aggressiveness – A good way to teach assertiveness is to have your own child order for him or herself at a restaurant. Role play with your child about aggressiveness to show them why no one likes to be hit, pushed, etc. I also sometimes use the technique of how would the child feel if they were the one being kicked, pinched, hit, etc.

Being Part of a Team – A good way to teach children about team spirit is to have them join a sport’s team or club such as soccer. If sports isn’t an option, then play board games with your family and break into teams. Show your child what it means to be part of a team and not to single anyone out.

Community – Volunteer with your child and talk about the importance of respecting everyone no matter the situation.

What it Means to Lose – Again, sports is a great way to learn this lesson as long as the league doesn’t reward teams for both winning and losing. If your child doesn’t play sports, then consider taking your child to a game and talking about what it means to lose and the disappointment of the team who loses.

Confidence – Discuss how the child can be confident if a bullying situation occurs such as not saying anything to the bully and playing with other children. Also, don’t wait until an incident happens to talk to your child about confidence. As early as possible, discuss leadership qualities such as volunteering for activities at school (ex. leading book time, helping with classroom duties, etc.) If you can build leadership qualities early, this is not a bad trait to have. Even if your child is shy, have them greet different people who come to your house.

Reality – This one is hard because kid’s have a different reality meaning if someone ever called me a “baby” or a “boy” these days I’d laugh, but understand this can be hurtful to a child. Let your child know you will always love them and they should always love themselves no matter the scenario. If you need to, tell them all of the traits you think is special about them and ask them what traits they like about themselves.

Being Smart – Bullies want to see your reaction; which means if you don’t give a response they’ll get tired of bullying you. If the bullying is a constant activity, consider all options. If you’ve walked away or told someone and it still doesn’t stop, then you may have to fight back through brains instead of fists. Talk to a professional of how best to do this.

Keep Parents in the Loop – Let your kids know they are never alone no-matter the circumstance they can come to you. As a parent, be active in their lives since actions are louder than words.

Staying Positive – Think through your blessings and concentrate on these blessings instead of life’s misgivings.

Faith – Have Faith and know God is here for you.

Sadly until bullying no longer exists, the best remedy is to confront it head on instead of ignoring it. As a parent, it is important to concentrate on teachable moments rather than violence.